Another victory on the road for our U14s. This time away to Kilclief last Monday evening.

Both sides served up a combined total of 26 goals and 22 points in a game that was end to end throughout. The Fin remain unbeaten with five wins from five games. Remarkable stuff given that this group of players finished second from bottom in U12C two seasons ago. But testament to their efforts and that of their coaches over the past two years. Next up is Drumaness.

Best wishes to Niall Dornan and Anthony Quinn who are both recovering from injuries at the minute. Hope to see you both back on the field soon.

Our U12s game v Dromara was postponed and will be played this Wednesday at 7pm in Dromara.

The Fin club were represented by Marty Og Flanagan, Sean Croskery and Ryan Croskery. The boys did very well helping their school team to wins against Downpatrick and Annaclone but losing to Kilcoo and Saval. Well done boys.

Our seniors were awarded a walk over against Ballykinlar as they were unable to fulfil the fixture. The lads were all at the pitch and so used the opportunity for another training session in preparation for the upcoming Feis 7s. The Seniors will also play Teconnaught away in the league on Tuesday night. This game will see Paul, Patrick and Oran Flanagan go head to head with their five cousins who play for Teconnaught.

Our Year 6’s & Year 4’s enjoyed the latest Go Games Blitz in Drumaness last Saturday morning. Thanks to Drumaness for hosting. Well done to all our new players they were superb in their first outing. 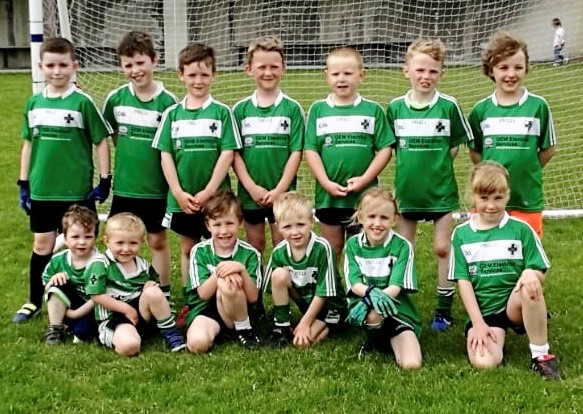 The Kellogs Cúl Camp will be held at Pairc Baile Anna Monday 16th to Friday 20th July. It can now been booked online. The Nursery Camp must be booked direct with the club. See our club website of social media for details.

Our annual ‘Fin Fun Mud Run’ event is now in it’s fourth year. It will be a two day event Saturday 16th & Sunday 17th June. You can book via the link on our club’s website www.aughlisnafingac.com. Book early to avoid disappointment.